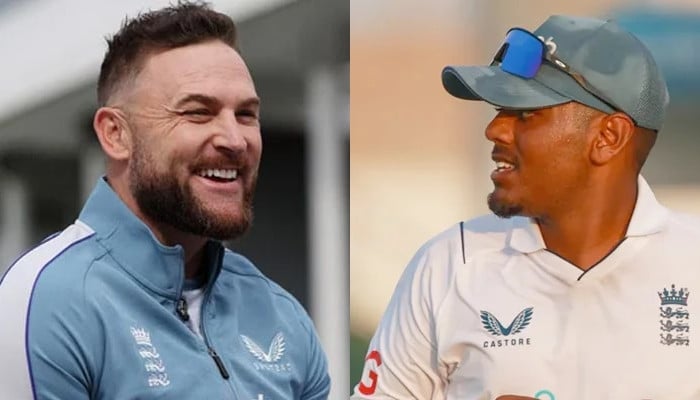 England coach Brendon McCullum stated Rehan Ahmed has a improbable alternative to showcase his expertise on the three-test collection in Pakistan and has no doubts the 18-year-old has the boldness and skill to beat the challenges he’ll face on tour.

All-rounder Ahmed has featured in solely three first-class matches for Leicestershire — taking 9 wickets and making 195 runs — and will turn out to be England’s youngest males’s take a look at participant if he performs in Pakistan subsequent month.

“What a wonderful form of alternative for somebody like him,” McCullum advised the Day by day Telegraph. “He appears actually assured in himself.

“He is 18 and on an England tour to Pakistan so there’s some actual alternatives there and there will be some challenges alongside the way in which, nevertheless it’s our job to determine this out.

“We all know that he isn’t the completed product. He is a great distance away from that, however he is acquired one thing which is fairly form of particular.”

Forward of their Pakistan tour, England performed a three-day match towards the Lions within the United Arab Emirates final week.

McCullum burdened the significance of bringing groups collectively within the build-up to a tour, saying it helps develop camaraderie in a squad that regularly separates to play totally different codecs.

“One studying we had from earlier on within the yr is that as a result of now the crew could be very separate to the Twenty20 arrange,” McCullum stated.

“Plenty of our guys go off and so they do their very own factor, so if we’re asking these guys to push the boundaries, then we have to get them collectively a bit earlier.

“Plenty of that’s not to do with cricket however breaking down these obstacles, spending time socially, enjoying golf or on the pool. Upon getting spent a few days collectively, you possibly can put the graft in and begin ticking off the talent aspect of issues.”

England’s first match towards Pakistan begins on Thursday in Rawalpindi.

Weekly Local weather and Power Information Roundup #530 – Watts Up With That?